It was a question of when, not if Scottie Scheffler was going to start winning tournaments, but I’m not sure anyone saw this fury of domination coming.   Prior to the Super Bowl in February, Scottie had not even won a single tournament on the PGA Tour.  Again, it’s not that anyone didn’t see this coming, Scottie has been playing very well and beat the socks of former world #1, John Rahm at the Ryder Cup back in September.

So let’s take look at what Scottie has accomplished in the last couple months:

First was Super Bowl Sunday, where Scheffler beat out the reigning FedEx Cup Champion, Patrick Cantlay in a playoff to secure his first ever PGA Tour win.

Next, he crossed the country to play at Arnie’s place, Bay Hill, where conditions were very difficult for the entire field, but prevailed for his second win in 3 weeks.

Then this past weekend, at Austin Country Club in his home state of Texas, he never went down in a 57 hole run to close out former World #1 Dustin Johnson and Kevin Kisner to secure his 3rd win in 5 starts. 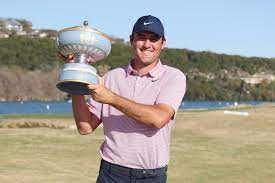 It’s remarkable the dominance he’s’ having on the golf course right now.  You can tell he doesn’t even really believe it.  “My heads spinning” seems like the right choice of words for a kid who never used to play youth golf in shorts, because the pros wore pants.  He becomes the third youngest player to reach the #1 slot, behind his collegiate teammate Jordan Spieth and Tiger Woods.

We’re not saying he’s going to win the Masters, but you’d be a fool not to put a little money on him at +1600.