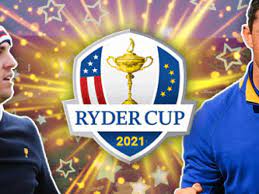 This weekend marks the year’s last major championship at Royal St. George in the UK and the golf world turns its eyes to Ryder Cup. Yes, the FedEx Cup Playoffs and the TOUR Championship at East Lake in Atlanta are first, but in a Ryder Cup year, the end of the PGA Tour season seems to get over shadowed. Or is it just me?

So here’s where we currently stand based on points. This obviously could change. Team USA would have Dustin Johnson, Bryson DeChambeau, Colin Morikowa, Brooks Kopeka, Justin Thomas and Xander Schauffle. Captain Steve Stricker is responsible for selecting the next six picks. We gotta believe he’s’ going to take Spieth & Reed. Both playing well and have experience. Harris English has been playing amazing golf and right there in the points race, so there’s 9. Who’s the last 3 spots? Finau? Cantlay? Phil? Webb Simpson?

We’ll see how this weekend at Royal St. George plays out, it’s possible we see a candidate emerge from the bunch, but it’s no doubt going to be fun up in Wisconsin come September. If anyone is interested in learning more about going, we have some information on the website, and we’re available to chat about golf events anytime.